The Secret to Making Friends As An Adult

Making Friends As An Adult

Popular, you're gonna be popular. I'll teach you the proper poise when you talk to boys. Little ways to flirt and flounce, ooh! I'll show you what shoes to wear, how to fix your hair. Everything that really counts...

I was very popular today.


Popular, I'll help you be popular. You'll hang with the right cohorts, you'll be good at sports. Know the slang you've got to know...

I stopped at the grocery store and instantly regretted it once I saw the crowd, realizing too late it was too close to the holiday weekend for a quick stop. I grabbed one of those little carts with an upper and lower basket and squeezed my way in, planning to grab just a few things and get the heck out of there. I hate crowds. I suppose everyone hates crowds, at least at the grocery store.

Popular, I know about popular. And with an assist from me to be who you'll be...
While walking toward the watermelon, I noticed two shopping carts full of wine with clearance stickers. I randomly picked up a bottle, expecting the price to be outrageous. Smith's never seems to mark their wine down very much.

Surprised, I rummaged through the other bottles and found $12.99 bottles of port for $2, $17.99 Cabernet Sauvignons for $2, and even a $22.99 bottle of whiskey for $5. It was clearly a pricing mistake, probably made by an inexperienced or disgruntled employee, and I did what any of you would have done. I began moving all of the bottles into my cart. 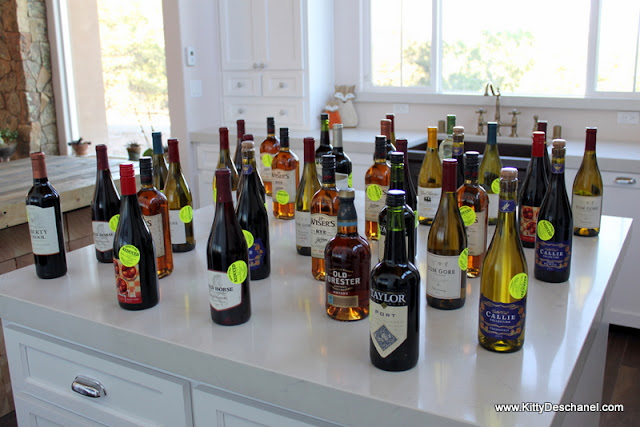 Looking back, I should have simply (well, not simply) pushed both carts of wine directly to the nearest checkout. Instead, an older woman wandered over and began placing bottles in her cart. She was friendly and talkative and we quickly bonded over our love of good deals. She told me about her children and their plans for the upcoming holiday. She called me her wine buddy and even waved goodbye when I saw her leaving the store. My wine buddy sure was nice, but she sure snatched up a greedy chunk of the bargains. Those were my pinot noirs! All. Of. Them. 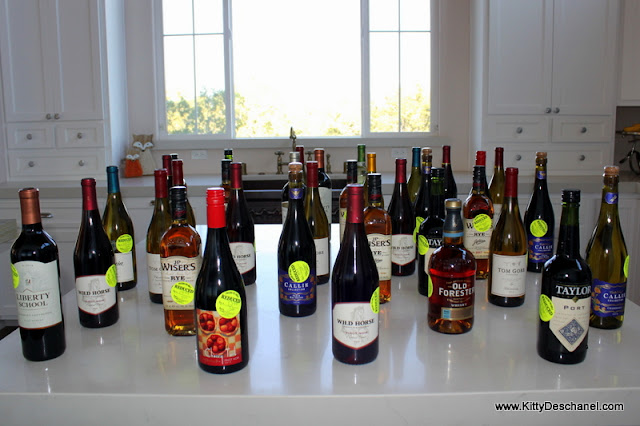 When the upper and lower baskets of my cart were full, I sought out the groceries I'd actually come for, although I didn't actually know where any of them were going to fit. I made the mistake of walking past the wine section on my way to the yogurt, wondering if people would understand that I was sticking 32 oz containers in my purse just temporarily and not sneakily. I planned to make a big show of it, just to be safe.

Two dollars. Two dollars. Two dollars. All of the bottles I passed were much more. I circled back, ignoring several judgmental looks and gathering up enough wine to fill that little basket on the back of the cart. Then, I reconfigured the two main ones and was able to fit in three more bottles of whiskey. I inspected the few remaining bottles to make sure I hadn't missed any gems, unsure what I would actually do if I had. Stick wine in my purse, I guess. It's a big purse. Luckily, the discarded bottles were all Beringers and Rex Goliaths. I felt a little sad for them. Rejected, even at $2.

Now I was ready to do my real grocery shopping. 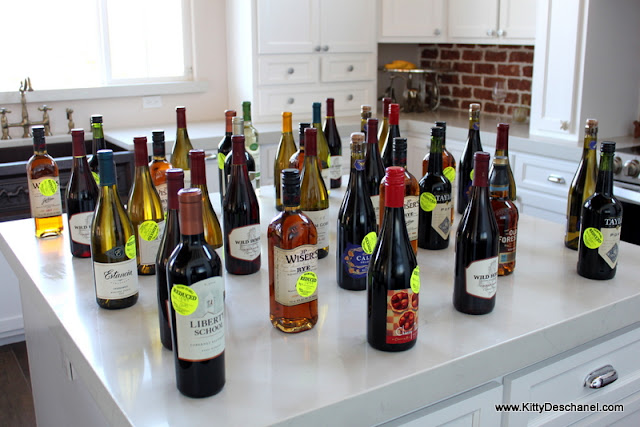 Jingling my way carefully and noisily down the crowded aisles, I'll admit I felt a tad self-conscious. I wanted to explain to everyone that what surely looked like an excessive amount of alcohol was actually not. What they were seeing was an investment. Stored properly, it's not like it goes bad, right? And it wasn't just for me. My husband was going to drink some too.

Actually, I should probably provide an explanation to my blog readers because I feel like you guys might not be 100% believing me here. We're not alcoholics! I just love a good deal. Remember when I bought not enough spaghetti and pasta sauce, much to SN's exasperation? Remind me to post a photo of our new pantry some time. It holds so many jars of pickles without even trying. It's impossible to overstock those. What are they going to do, become more pickled? 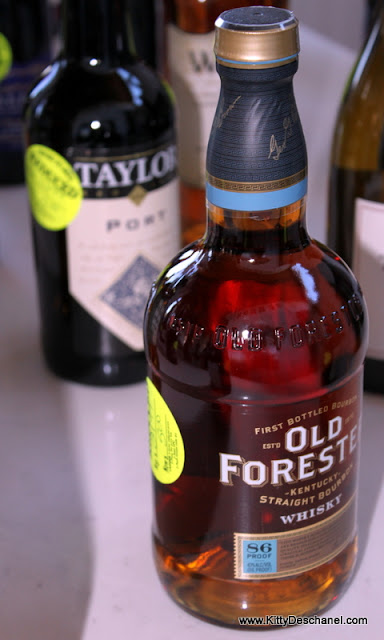 In the baking aisle, two little old ladies were giving me some seriously disapproving side-eye, which caused my socially awkward brain to do the only thing it knows how to do. I gave them my biggest, goofiest, all-teeth-and-gums smile. And you know what? They both smiled back.

Continuing my adventure through the store, glass clattering with every step, I beamed at everyone. Everyone smiled right back at me. Eight (yes, eight!) different people laughed and told me a variation of "I'm coming to your house tonight."

I even received a high five. 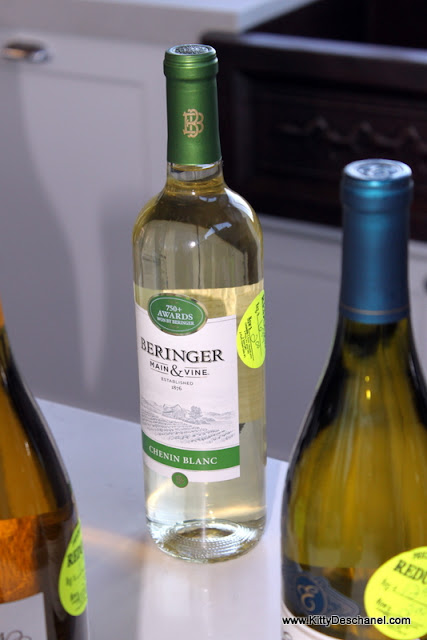 In the frenzy, a Beringer somehow made its way into my cart. Sneaky bastard.

This happy tale of friendship was nearly halted by a checkout tragedy. It turns out you cannot load dozens of tall, glass bottles onto the conveyor. Did you know this? When it started up, they all began violently shaking. I reached out to steady them, but bottles began to topple over, knocking each other down like dominoes! The guy in line behind me gasped. Actually, I think everyone within at least three registers gasped.

Miraculously, nothing fell off the conveyor. I'm not a big believer in miracles, but what else would you call this?

The cashier had been cold to the woman in line ahead of me and I was certain she'd be annoyed about having to ring up so many bottles, especially when I learned she had to manually override the price on each and every one. (Seriously, Smith's?) She also had to remove the plastic security cap from all of the whiskeys and, of course, it turned out that they had two different types of caps and she only had the tool for one and not the other. She was not going to be my friend, right? About halfway through, sensing her frustration, I joked that this would probably end up being the first time in my life that I'm pulled over on my way home.

She laughed so hard. When you have all the wine, everyone loves you. 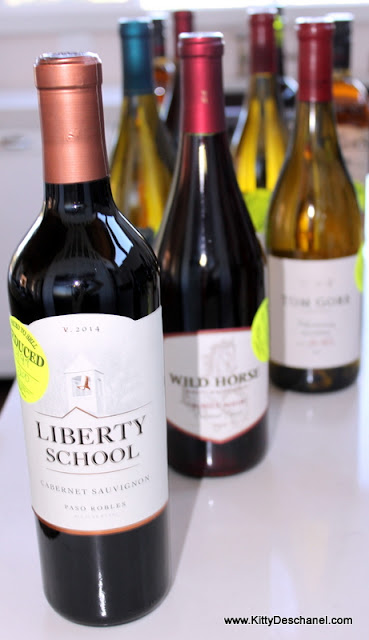 The very best part of this wine adventure? On all of these obscenely underpriced bottles, Smith's still gave me the case discount. $1.60 each!!

Damn. I should have bought more, Beringers and all.
On a serious note, this article promised you the secret to making friends as an adult and I have 5 expert strategies. Plus, you know I can't resist sharing this meme: 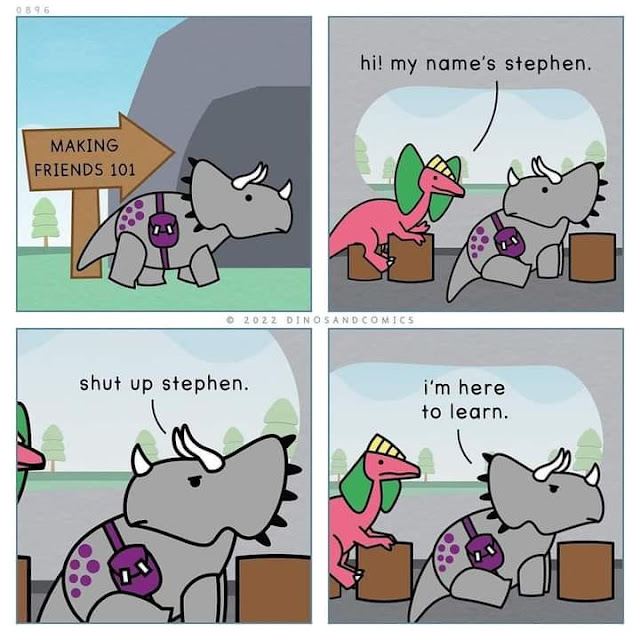 Making Friends As An Adult

How to Make Friends As An Adult