Who Are These Weird People? 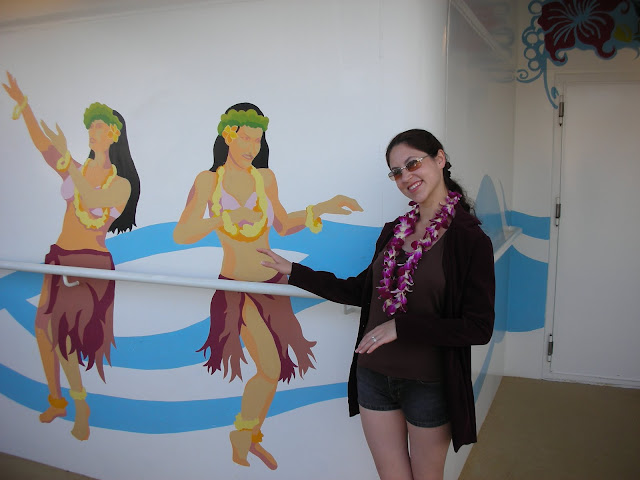 Aloha!
I'm a freelance writer who believes in infusing all topics, from Jessner peels and beauty tips to chronic insomnia and Amerisleep mattress reviews, with a dose of humor. I'm also a blogger of Sexy (Nerd) adventures and a lifelong insomniac. Yes, even as a baby! My family says I was a nightmare. Frankly, I think they're still a little bit mad at me all these years later.


Thanks to his endless shenanigans, my Sexy Nerd (SN) makes frequent appearances on my blog. I have written for major brands including Dove, Anheuser-Busch, and Jimmy Dean. My work has been featured on Huffington Post and Houzz. Connect with me on Twitter and Instagram @KittyDeschanel.

I was born in Australia, grew up in the bustling Bay Area, and moved to dusty Albuquerque shortly before high school. I have a degree in psychology from the University of New Mexico. Here on my blog, I started out writing about whatever random things interested me and have since narrowed in on just a few topics based on posts that performed well, such as decorating ideas, wine festivals, and Amerisleep mattress reviews. Give your audience what they want, right?

I've worked in a pediatric dental office for 16 years, so don't expect to see any baby posts around here anytime soon. The kids are cute and sweet and well behaved...70% of the time. My job is the best birth control in the world!
It's for the best. My husband wants to name a baby Nuke. Nuke the baby. You probably think I'm joking: https://www.kittydeschanel.com/2011/04/unique-baby-name.html

Favorite Book:
Do Not Say We Have Nothing by Madeleine Thien

Most Comfortable Pillow:
Bluewave Bedding Ultra Slim Gel-Infused Memory Foam Pillow
I’ve had 2 of these firm pillows in different thicknesses (slim and ultra slim) for several years. They're great when sleeping on your side and on your stomach.

Favorite Vacation Destination:
Iceland...though Copenhagen is a close runner up
How convenient that it's easy to hit both places in a single trip.

Beauty Product I Swear By:
Biologique Recherche Lotion P50 1970
I hate how beauty blogs are always throwing the term "game changer" around, so I won't call it that. Let's go with "awesomesauce".

Car I'd Buy Again and Again:
Chevy Volt
Mine has nearly 70,000 miles and has needed ZERO maintenance, other than routine things like oil changes, and even those are few and far between because the gas engine almost never runs. Why isn't every car on the road a Volt? Ours was the same price as a Prius and you see those everywhere.

Best Robot Vacuum:
ILIFE V5s Pro Vacuuming and Mopping Robot
We've owned 2 Roombas. This is better and less expensive. Ours is named The Hamburglar. 3 years in, it's still going strong.

Effective Way to Help Improve Sleep:
Cognitive Behavioral Therapy, such as the online SHUTi program
You might also look into an Oura ring, which is like a Fitbit that focuses on sleep improvement. I’m actually waiting to order one for myself right now (they had a sale recently and I missed it – darn). I work for the founder of the National Sleep Alliance, Dr. Brandes (https://www.sandiaparkfamilydentistry.com/meet-us), and he recommends it highly.

Website With the Most Bargains:
eBates
(Sorry, I refuse to call them Rakuten. I hate their name change!)
Since signing up, I've received about $1,500 off (cash back) on things I was going to buy anyway. How are there still people (like my parents) not using this site?

Hotel Chain I Prefer:
Marriott, even though their mattresses are a nightmare.
I can't resist a free breakfast. Here's a hilariously embarrassing story about yours truly trying to make a Marriott waffle.

How to Avoid Cavities:
Colgate Gel-Kam Fluoride
I work for a dentist and I eat an excessive amount of sugar. Trust me on this. 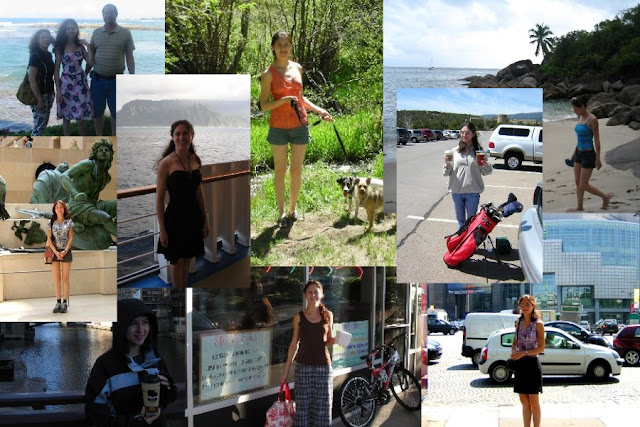 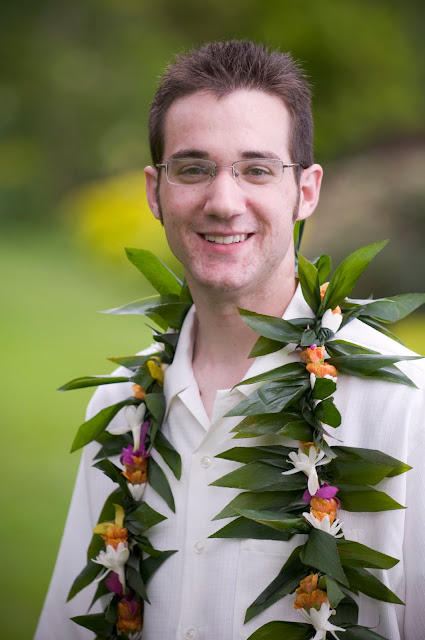 Isn't he just the cutest? I love this guy.

Sexy Nerd grew up in the tiny town of Buena Vista, Colorado. Before moving there, he lived in the even tinier town of Johnson, Kansas, where his grandpa was (still is) the mayor. I love to poke fun at him and his naive, small-town ways (with love, of course).

He's a mechanical engineer with a Master's Degree in mechatronics (something I'd never even heard of before we met...actually, I'm still not 100% clear on what this is) and he's one smart cookie a clever guy brilliant a big nerd. He even has a second "just for fun" Master's Degree in political science. Sexy Nerd cooks, he cleans, he builds things for our house (entirely new rooms included) and he even trims Pica's nails and brews beer. What more could a girl ask for? If only he weren't hopelessly addicted to all things racing! 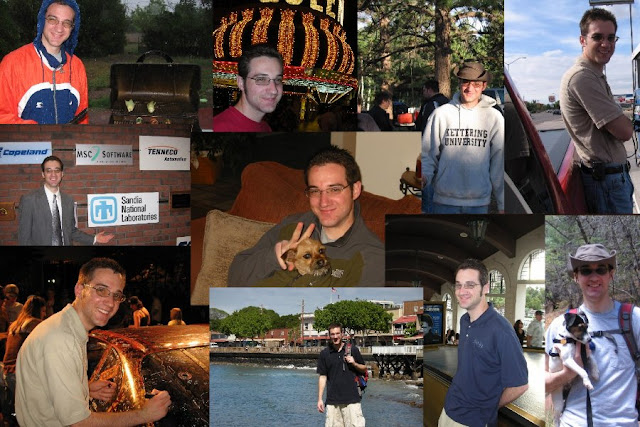 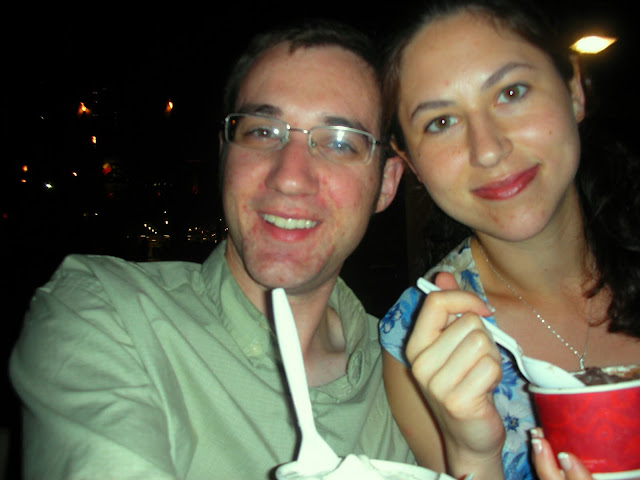 Photo from our honeymoon, a million acne-ridden years ago.

We met on Match.com and had our first date on January 10th, 2004. Keeping our relationship together was tricky because I was living in Albuquerque and Sexy Nerd was attending school in Flint, Michigan.

The first time he came back from school, I had my doubts about him, especially as he had invited himself to live in my apartment, completely freaking me out. Sexy Nerd decided to take a trip up to Colorado to visit his family. While he was away, I continued to think that us being together was a bad idea. I really liked having my apartment all to myself! As fate would have it, he returned with his hands all cut up - the only reason he'd gone to Colorado was to use his dad's tools to build me a wire candleholder tree, just like one I'd pointed out in a store. Isn't he just the sweetest guy ever?

Sweetest guy or not, Sexy Nerd's proposal after only a year of dating was a little soon for me - I had a panic attack, hysterically laughing while trying to decide what to tell him. It wasn't anything against him. It's just that, come on, we'd only been together a year. I'd had bad high school relationships that lasted for more than a year!

A long engagement later, we got married in Hawaii on our 4 year anniversary. The ceremony was performed by a man in a skirt, Captain Howie from Above Heaven's Gate Weddings, who was high as a kite, relieved himself in the bushes, and talked about "midget leprechauns" in front of all our friends and family. It was wonderful and unlike any other wedding...though I would not recommend Captain Howie under any circumstance!

Oh, and a chicken wandered over unexpectedly during our vows. We named her Chicklet. She was delicious. 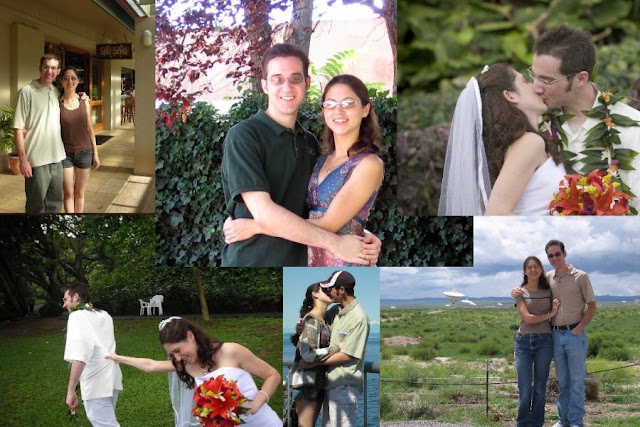 What's the deal with the lamb? Why is this site named LambAround?

Growing up, I loved the stuffed lamb that used to be featured on my blog header. One day, my mom insisted on washing it. Convinced my lamb would drown and come out of the washing machine completely ruined, I begged my mom to spare its life. She ignored my pleas and threw it into the wash.

My lamb came out missing an ear!

I'm sure that was one of those "oh crap" parenthood moments and, yes, I'm still traumatized.

My original plan for this blog was to take a photo of my stuffed lamb in different locations, hence the name LambAround. Easy peasy considering the stuffed lamb is keychain-size and I've traveled all over, Seychelles, Paris, and Australia included. Well, it turns out that is boring! So, I decided to just blog about whatever interests me.

And now the lamb is gone almost entirely from my site, including the blog name LambAround. I left this section here though to avoid confusion if you come across a lamb reference in an old post...though I suppose this section itself is pretty much guaranteeing confusion.
Here for some puppy cuteness? Meet Olive and Bernadette. We love our woolly bullies...even when they flooded our house!

Why is there a pig in the kitchen?

Why not have a pig in the kitchen? Kitchen Pig was purchased at a little shop inside the Coronado Mall in Albuquerque. Although it was love at first sight, I nearly didn't get him because he was more than I wanted to spend. Luckily, Sexy Nerd was able to convince me that $4 probably wasn't going to push us into bankruptcy. 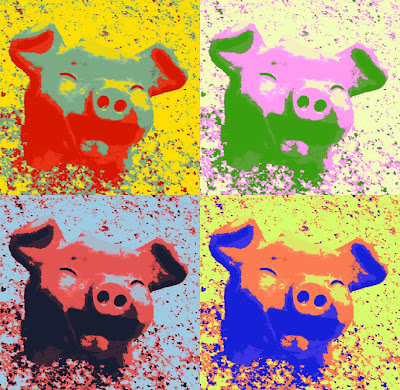 Disclaimer (added by Sexy Nerd): The Kitchen Pig logo is trademarked by Kitchen Pig Brewery. It's an oink of a good time!

I am currently seeking guest bloggers and it's a win-win situation. Details can be found on my Guest Blogging page.

Some posts contain ads and affiliate links. Any review or recommendation made is based 100% on my honest opinion, regardless of any sponsorship arrangement. As someone who seeks reviews before making almost any purchase, I strongly believe that if I do not stand by a product, I cannot recommend it.
Follow the Sexy (Nerd) Adventures on Social Media: