15 Fun Things To Do in Hobart, Tasmania

After our 2-week Tasmania road trip, my plan is to retire in Hobart one day. There are so many fun things to do! Just call us Tasmaniacs.
For the Hobart portion of our grand Australian adventure, we did not need a rental car. Other than an occasional Uber (the Hobart airport is much further away than we'd expected), we found Hobart to be a pleasantly walkable city, even in May.
Remember kids, May in the USA = nice. May on the opposite side of the world = well, still pretty darn nice.

Don't miss out on Tasmania when you visit Australia. Here is our complete guide to the best things to do in Hobart, plus a couple of places you can skip:

Things to Do in Hobart

I'll start with everyone's favorite, the food. Food is what travel is all about, isn't it? If I could go back in time, I'd shake my younger self by the shoulders and say, You're on Vacation! Stop eating at McDonalds! 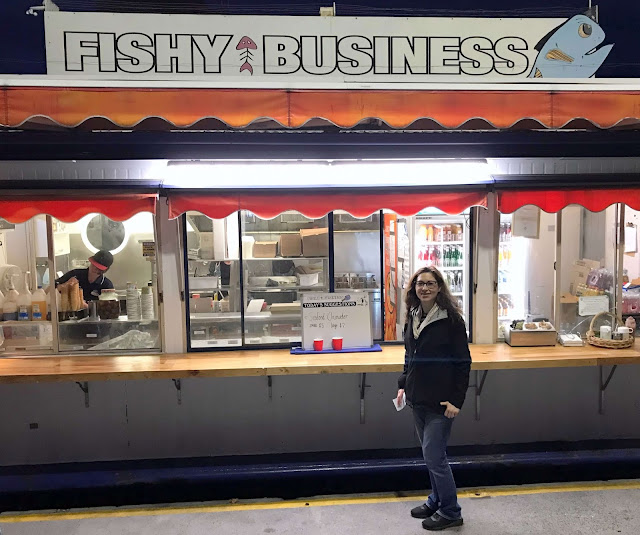 There are several shops and restaurants neat the Hobart waterfront, including a few that float. There's a resident sea lion you can often see near the Fishy Business restaurant.
Sexy Nerd enjoyed seafood chowder here and I recommend the ice cream shop across the street, which had every flavor imaginable including my favorite, Rum Raisin. You can't find Rum Raisin at home in New Mexico. It ticks me off because it's not like I'm going to get drunk on ice cream. 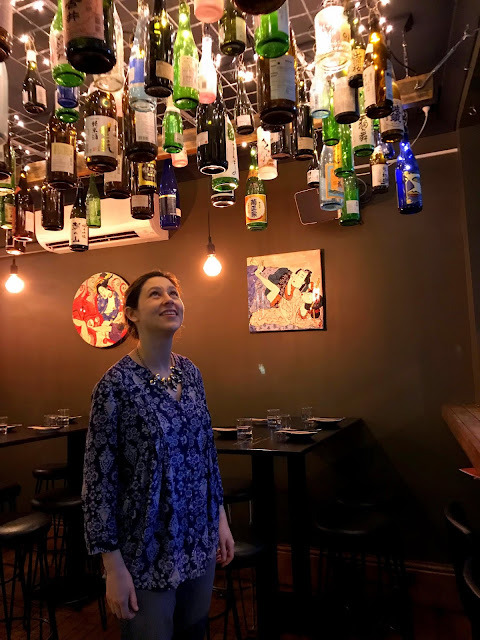 Sexy Nerd really enjoyed dinner at Bar Wa Izakaya, "Where The Best Of Hobart And Tokyo Meet". He used chopsticks for the first time ever! You'll need to make a reservation if you want a decent table, which is a bit strange considering the place was almost empty when we were there. A crowd (which had made a reservation) was going to arrive later. This seemed to be a common practice in Tasmania. 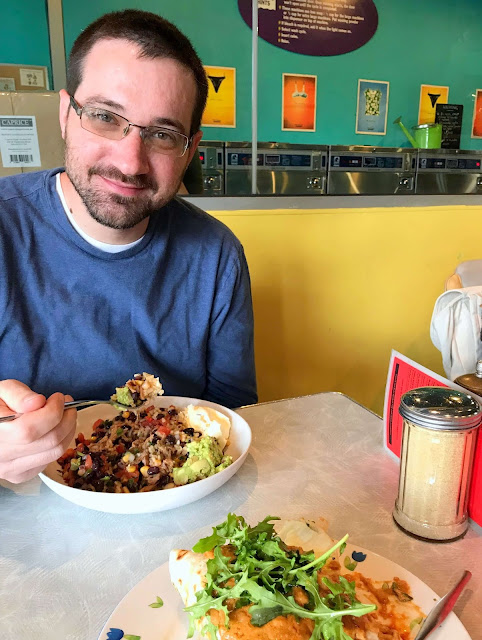 We had lunch at Machine Laundry Cafe, where you can eat while waiting for your laundry to finish. Although it's popular online, you can skip this one. The food was okay, like an Australian take on Mexican (more healthy), but overpriced. You're seeing a $50 meal in the photo above and that's just ridiculous. 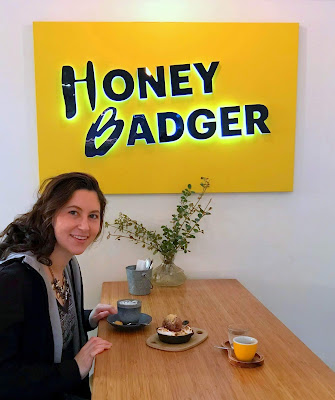 Practically next door is the Honey Badger Dessert Cafe, which is great for anyone with a sweet tooth. They'll make you an Instagram-worthy sundae with fairy floss (cotton candy), although it's smaller than it looks online.

I wish we'd had time to try their breakfast menu, as it looked especially good. There's an $18 breakfast stack with "Pancakes, Grilled Bacon, Fried Egg, Whipped Feta, Pumpkin Spice Butter, Maple Syrup, Toasted Walnuts, Roasted Cherry Tomatoes, and Seasonal Sprouts" and I might just need to plan another trip to Tasmania so I can order it.

This is the restaurant where Sexy Nerd accidentally ordered his infamous, hilarious tiny coffee. While there, I also learned that his nickname at work is 'The Honey Badger,' which was...weird.


Near the Hobart waterfront, there's a self-guided walking tour called the Battery Point Sculpture Trail. It's educational and meanders through the most expensive neighborhood in Hobart. The statues were difficult to find, but the homes were lovely. 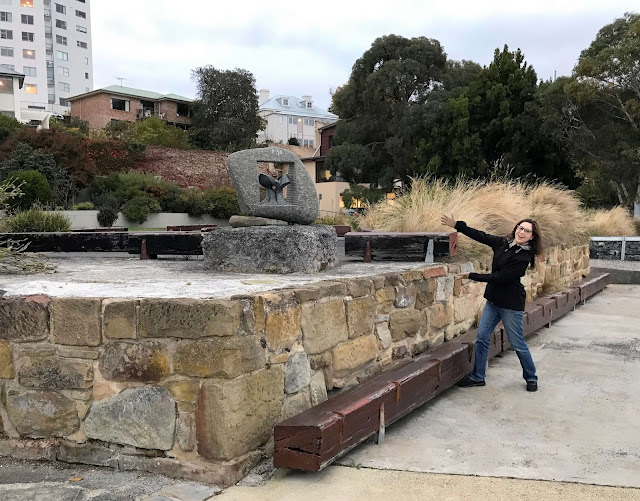 We were thrilled to have finally found one of the statues! (And later realized this wasn't even one of them.)

Speaking of statues, be sure to check out the Dogman and Rabbitgirl statue by Gillie and Marc. If you're near Machine Laundry Cafe or Honey Badger Dessert Cafe, you can't miss it. You'll also want to pop into the nearby Gallery Tasmania for more Gillie and Marc and an assortment of stunning artwork and jewelry from Australian artists. Sexy Nerd usually isn't into art, but even he found several pieces he'd love to buy. 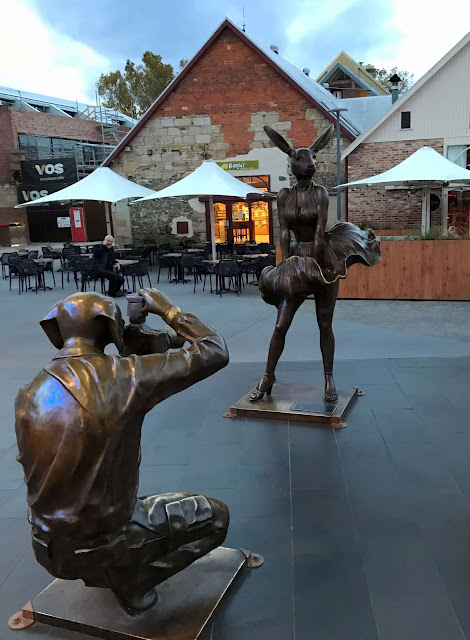 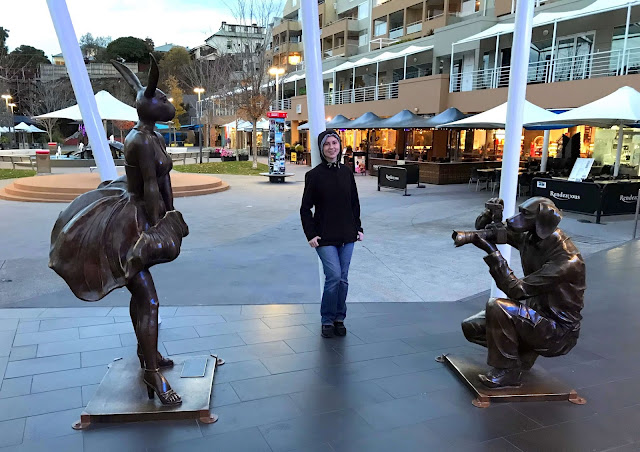 You can see the Honey Badger Dessert Cafe and Machine Laundry Cafe behind me. 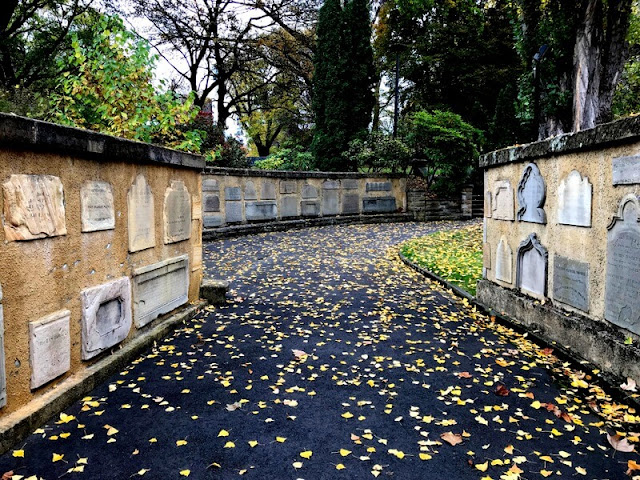 St David's Park is the site of Tasmania's first burial ground in 1804. This wall includes the headstones of many of the original settlers. 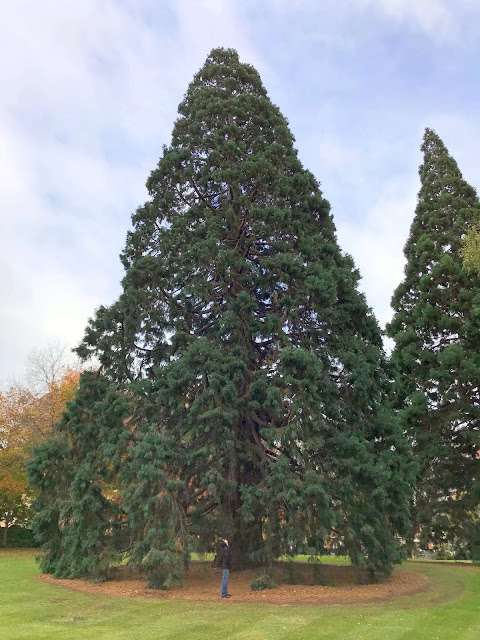 Check out the height of this tree! The park is also the meeting point of the wonderful Hobart Free Walking Tours, which was the #1 best thing we did in Hobart. Look for a friendly person in a hot pink shirt or, like our tour guide, hot pink hair. 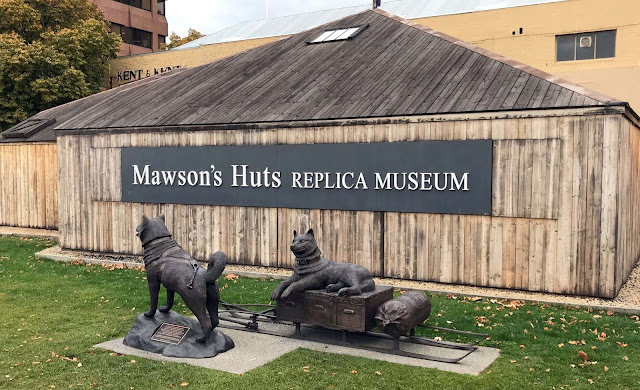 This is the Mawson's Huts Replica Museum, which teaches about Antarctic expeditions. We learned that the explorers owed their lives to their sled dogs...and sometimes planned from the start for them to be part of their food supply at the end of their journey.
Upsetting.

Rather than paying the $15 per person admission fee, which seemed a bit steep for such a tiny museum, we learned about Antarctic exploration through the free Tasmanian Museum & Art Gallery. There's also a free display behind the Mawson's Huts Replica Museum which details the chronological history of human presence in Antarctica. 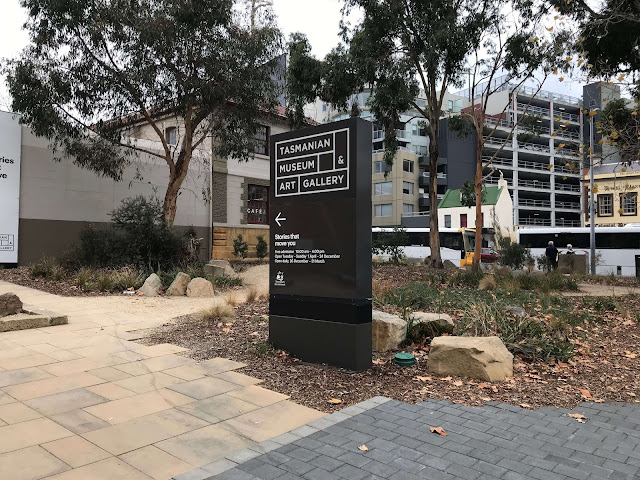 In addition to Antarctic exploration artifacts, the Tasmanian Museum & Art Gallery (home to the oldest working hydraulic lift in Australia, BTW) was filled with taxidermy animals, aboriginal history, and the story of the Tasmanian Tiger, which was rapidly forced into extinction by the government. Allow at least 3 hours here.

Rumor has it there are still Tasmanian Tigers alive, although they are only ever seen by patrons leaving the pub at closing.

If you'd like to try to see a Tasmanian Tiger for yourself, you'll want to make the Lark Distillery Cellar Door a priority. It's right next to the Mawson's Huts Replica Museum and is the oldest distillery in Tasmania - established in the long-ago year of 1992. 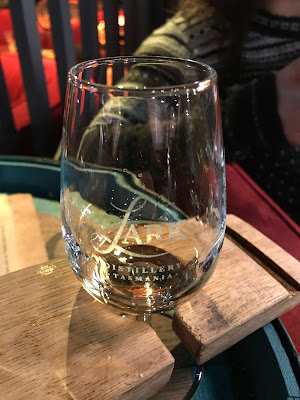 A relic of the convict era, distilling whiskey was illegal in Tasmania until the founders of Lark Distillery petitioned to change the law. 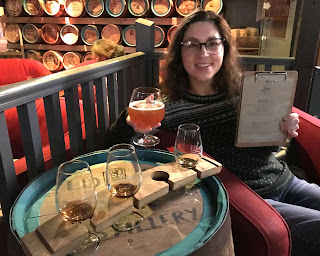 I don't enjoy whiskey (it burns!) but certainly enjoyed the ambiance and the enormous sour they poured me. Sexy Nerd had a $20 whiskey flight, which included a half nip each of Lark Classic Cask, Cask Strength, and Slainte Whiskey Liquor. We're so happy we went here instead of the Cascade Brewery. 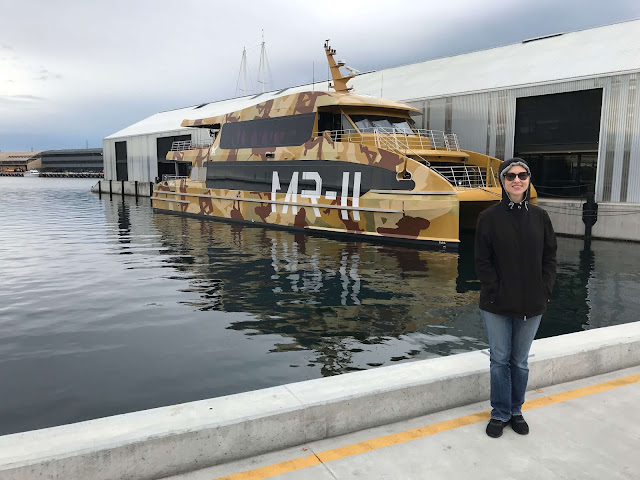 This is one of the ferries to MONA, Tasmania's world-renowned Museum of Old and New Art. It just looks like camouflage, right? Look more closely. It's decorated with strippers.

The remainder of this post features photos from the Royal Tasmanian Botanical Gardens, which was founded in 1818 and is the best botanical garden we have ever visited. And it was free*! And walking distance from our hotel!

*Technically, a donation was suggested on a sign at the entrance, but it also said the donation was tax deductible. Since we don't pay taxes in Australia, we figured this did not apply to us.

(Yes, we're terrible. If it makes you feel better, Tasmania received plenty of taxes from us throughout our 2 week road trip.) 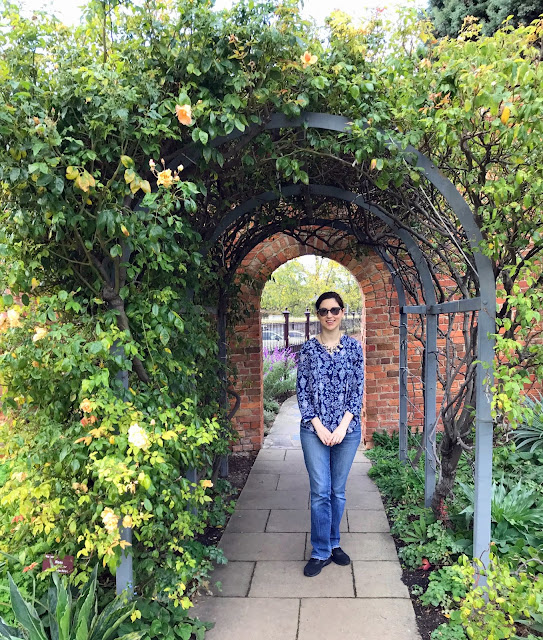 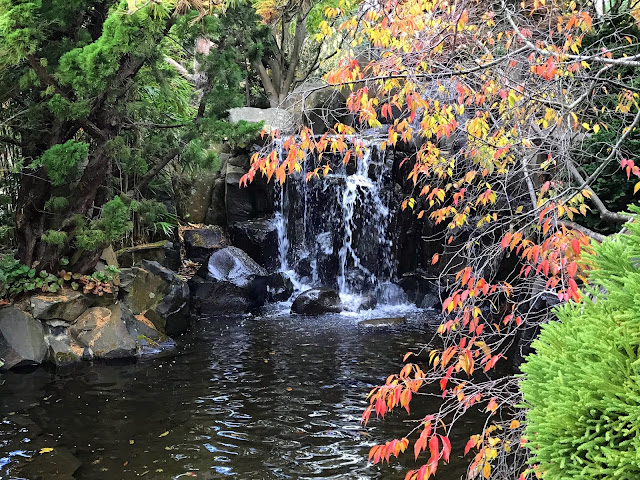 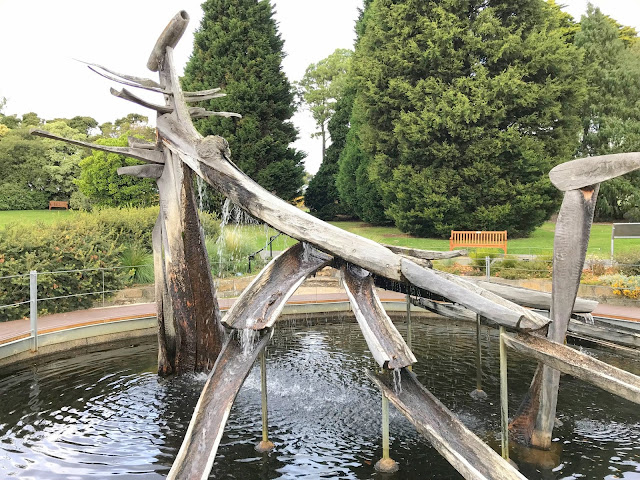 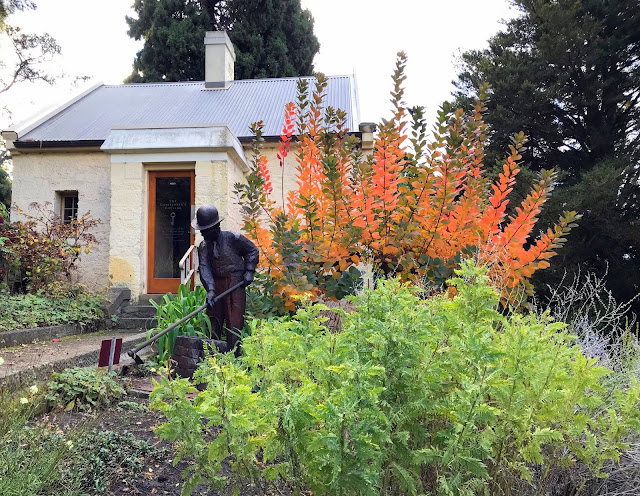 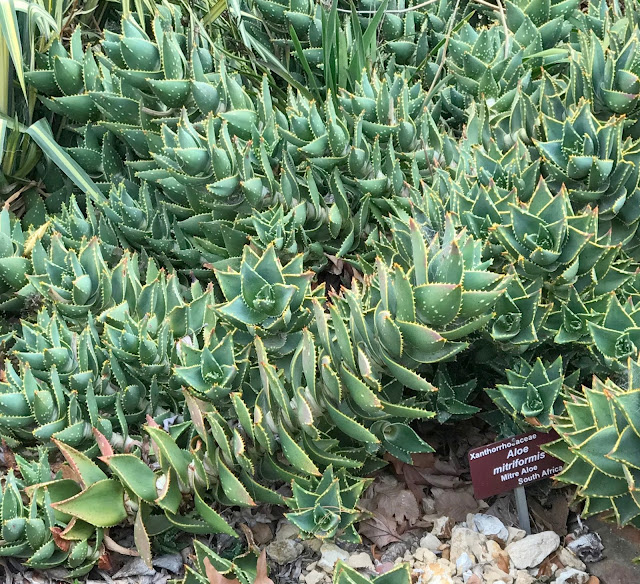 The Royal Tasmanian Botanical Gardens in Hobart features a collection of plants from around the world, including cactus and succulents. 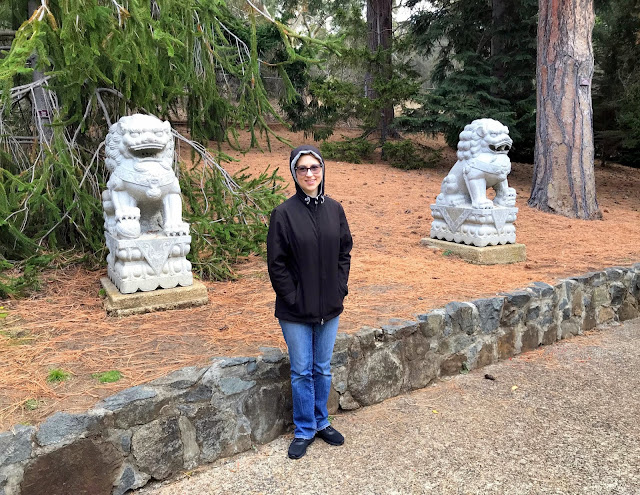 Foo Dogs in the Chinese Garden 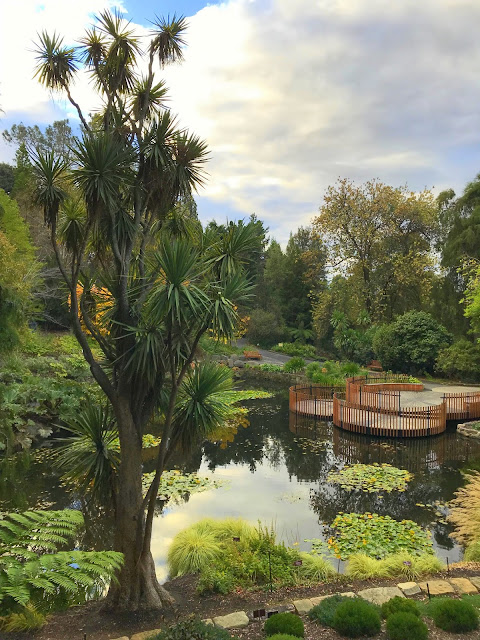 Sub-Antarctic Plant House - it's freezing and loud and I thought Sexy Nerd was taking a photo, not a video

That concludes our list of 15 Fun Things to See & Do in Hobart, Tasmania. You'll need at least 3 days for everything. To recap, our top recommendations are: