What is Embark? Dog DNA Test

Embark Coupon: Save $40 on an Embark Breed + Health Kit
(Update: It seems Embark doesn't actually want anyone to use their referral program, as the referral codes constantly expire and reach a maximum limit of referrals and other silly nonsense. If you have any trouble with the coupon, please send me an email at kittydeschanel@gmail.com and I'll email you an Embark coupon that works.)

You know those weird people who have DNA testing done on their dog? I haven't even bought a DNA kit for myself, but our dog DNA test results for Olive are ready!
The Embark Breed + Health Kit was our Christmas present from my parents. They love their little granddoggy. And how could they not? Just look at that face: 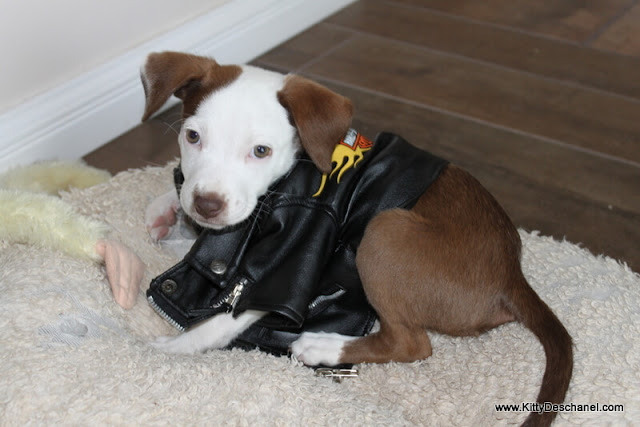 Olive is so cool in her Harley-Davidson jacket. Don't tell her I nabbed it off a stuffed animal.

Can you picture me swabbing her cheek to get the DNA sample? I felt a bit ridiculous. Olive wasn't too happy about it either, as I figured the best way to get the sample was to offer Olive breakfast, then swab the inside of her mouth while she was all drooly. Pavlov would be so proud. Also, I think this is the closest I have ever come to actually putting my psychology degree to use.

SN and I thought it would be fun to do a breed reveal video, similar to a gender reveal party, with all our friends and family. We'd open a box and balloons would float up with a different dog's face on each. Everyone would jump and hug and scream with delight.

That sounded like fun...and a ton of work. Not having to do that nonsense is one of the reasons we love being dog parents.

Answers also included Newfoundlander and a Chihuahua bred with a Great Dane, but these were just joking...I think.

Scroll through Olive's puppy photos and her *gasp* adult photos (I tend to mostly share her puppy pics - she was just so stinkin' cute!) and see if you can correctly guess the breeds Embark identified. 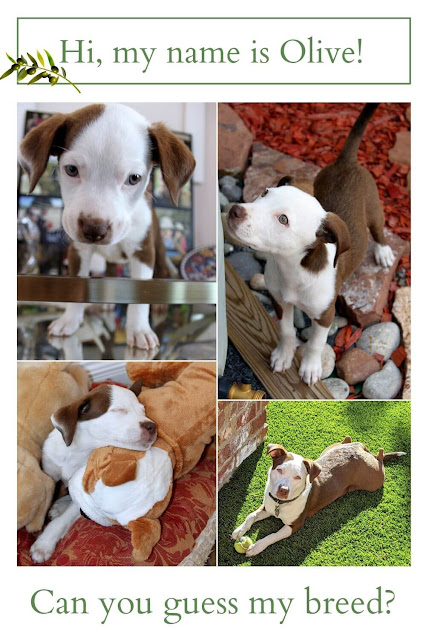 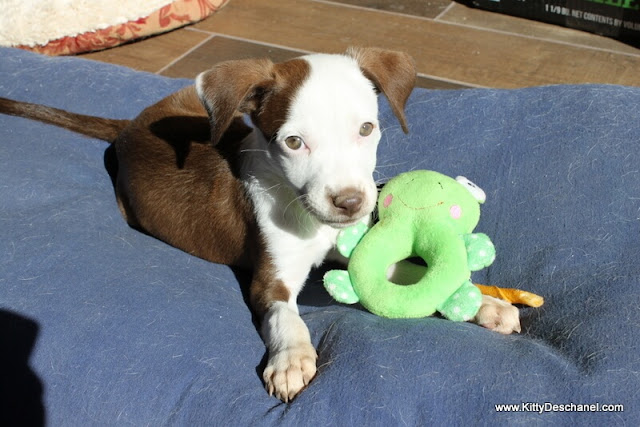 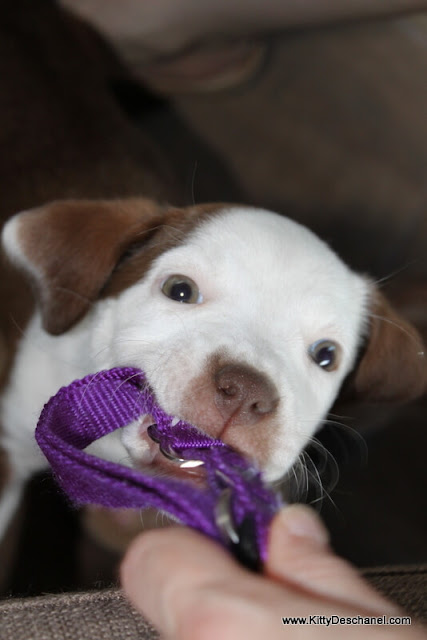 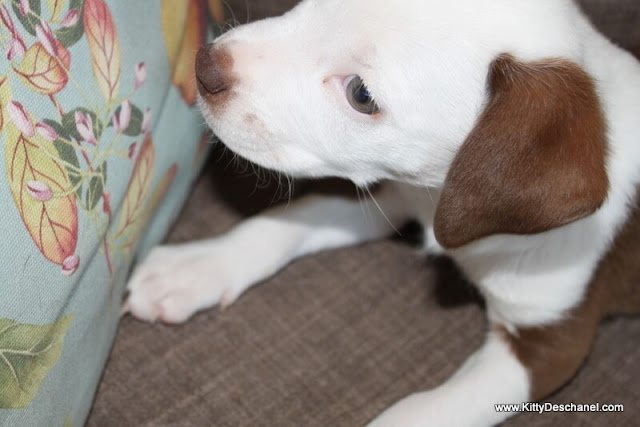 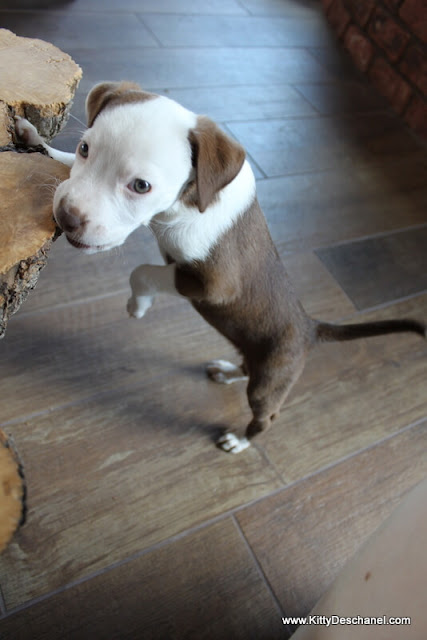 Olive is not allowed to eat the coffee table. I'm not sure how this photo even exists. 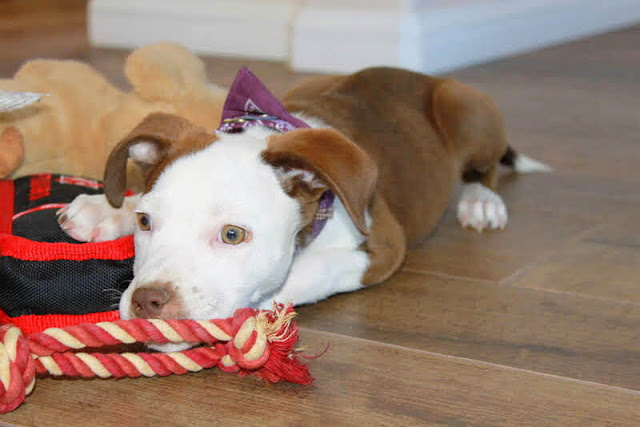 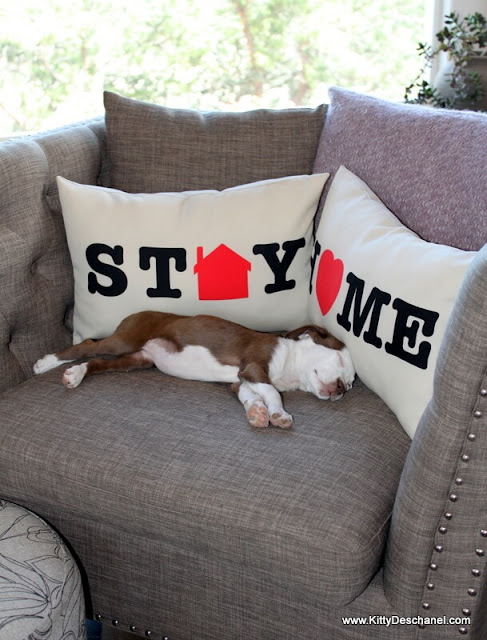 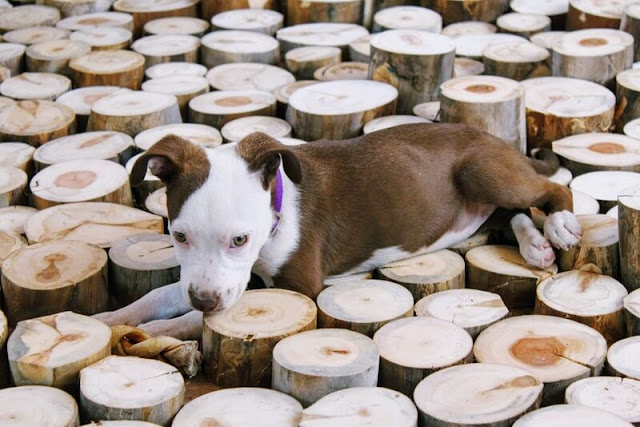 Olive has floppy lips and a tolerant personality. 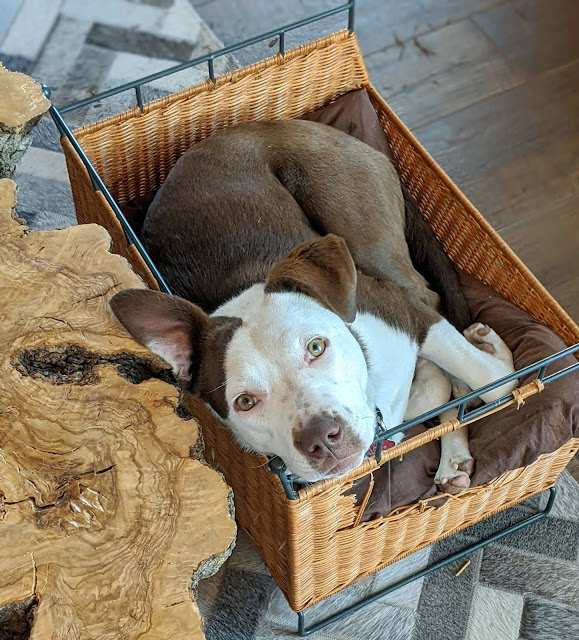 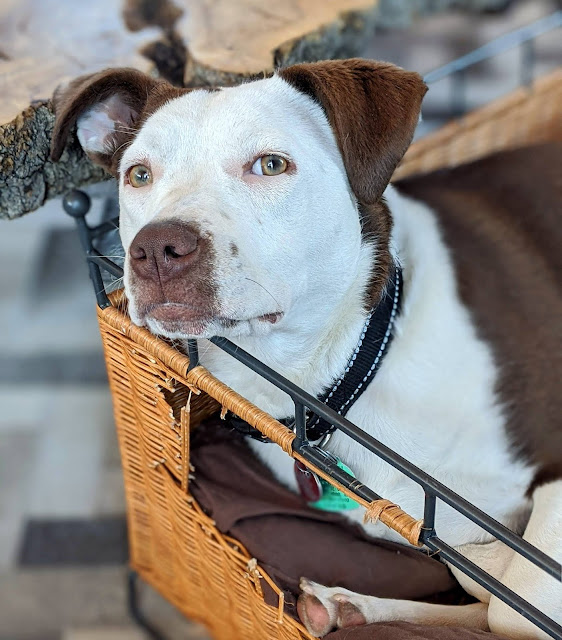 While you're guessing Olive's breed, see if you can guess who chewed through this basket. 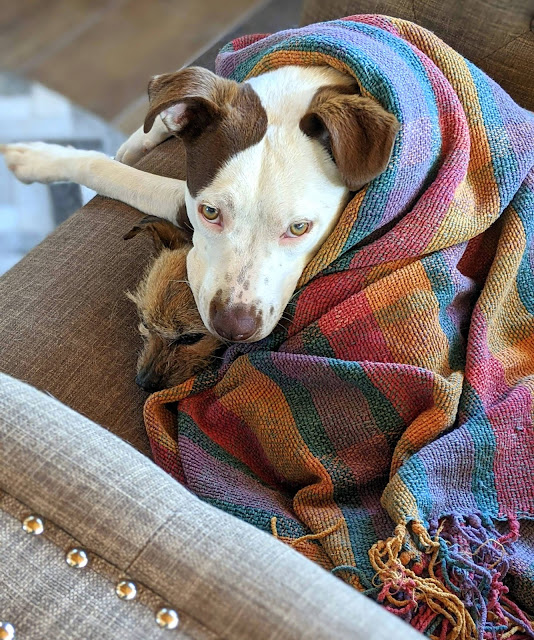 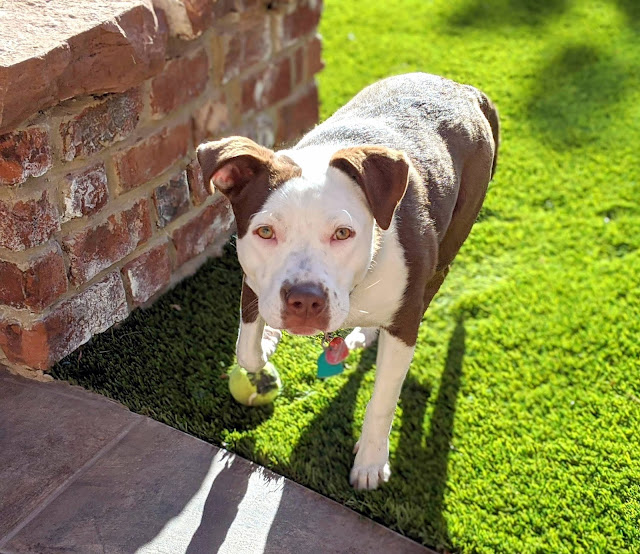 Do you have your guess? I bet you will be surprised to learn Olive is a very simple dog...

This was actually the exact breed guess of SN's mom on Facebook. Bragging rights to Tracy! A grandma just knows.

Olive's DNA report included details on each breed. Highlights from the American Bully:

They are very lazy while at home and will be perfectly content to nap on the couch all day while you're at work. That sounds exactly like Olive.

Because they're so strong and have such strong jaws, they can do a lot of damage to your house if they are not properly entertained! We have the destroyed toys and dog beds to verify that this one is true too.

Highlights from the Australian Shepherd:

It’s important to keep their mind occupied. When an Australian Shepherd gets bored, they have a tendency to invent their own games or activities, which sometimes involve destructive behaviors. In other words, Olive got this from both her parents and we are basically screwed.

Embark even provided a family tree: 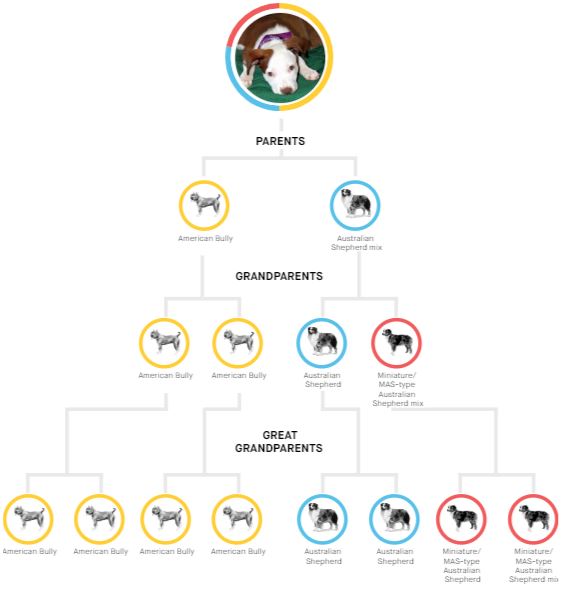 We gained a bunch of great information on Olive through her DNA test, including reassurance that she is a very healthy girl. Embark reports on more than 175 health conditions and she passed with an A+. In fact, the testing revealed that her siblings may have a condition called Progressive Retinal Atrophy, but that she does not. Whew!

I think the most fun part of the Embark DNA test is that we can see Olive's family members. We've used the relative feature to determine that whoever owns the American Bully in Los Lunas, NM is continually allowing their dog to have puppies, which are then dumped at the Valencia County Animal Shelter.

Our theory is that they are selling the purebred American Bully puppies, but that sometimes the dog gets out and has an adventure. Spay and neuter your pets, people! 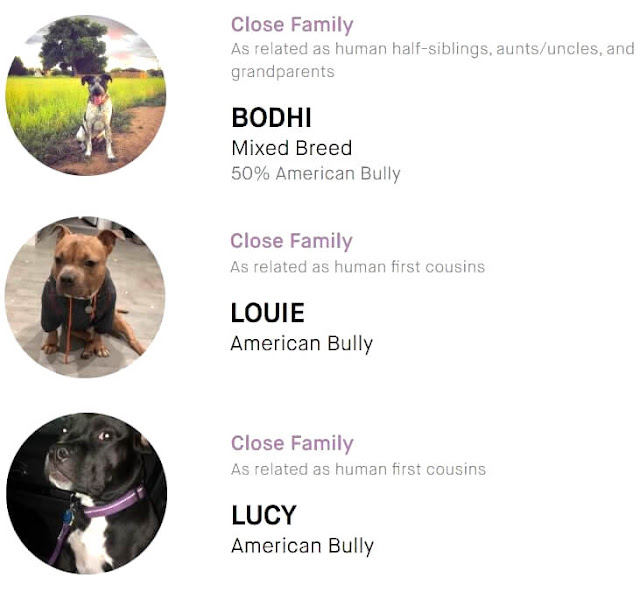 How fun would an all-dog family reunion be?

Q. Which dog DNA test is most accurate?

A. As rated by multiple sources, including Canine Journal and PC Mag, Embark is the most accurate dog DNA test currently available. It is the official dog DNA test of the Westminster Kennel Club. Competitors, such as Wisdom Panel, do not test for as many canine health conditions.

Q. What diseases does Embark test for?
A. Embark tests for over 175 genetic health conditions in 16 different areas, including breed-relevant genetic conditions. Diseases of the heart, brain, kidney and bladder, skin, eyes, and more are detailed in your Embark Breed + Health Kit results.

Q. How accurate is Embark?
A. Very! Embark is the only canine genetics company using a research-grade DNA genotyping platform. Industry-leading scientists spent years developing it at Cornell University College of Veterinary Medicine. Embark analyses more than 100x as much genetic information than other dog DNA tests.

Q. How long does it take to get results from Embark?
A. Results are typically available online within 2-4 weeks. High demand times, such as after Christmas, may result in a delay of up to 6 weeks. You will receive email updates throughout this period to let you know when your sample has been received, what tests are currently being performed, etc. 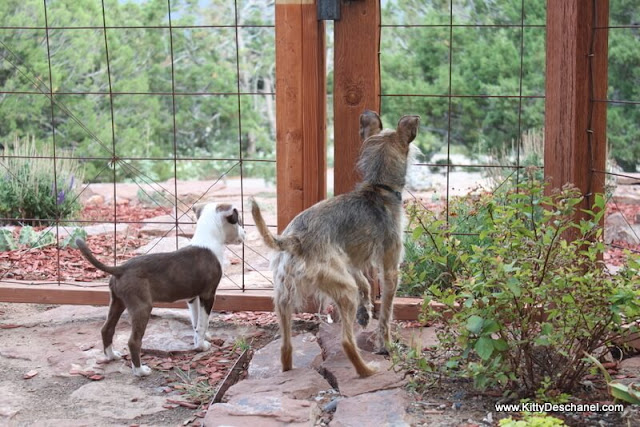 Next up? Embark DNA results for Biscuit. With her long legs, scruffy fur, and snippy attitude, your guess is as good as mine. I'm thinking Chihuahua, Yorkie, and...some sort of rodent.